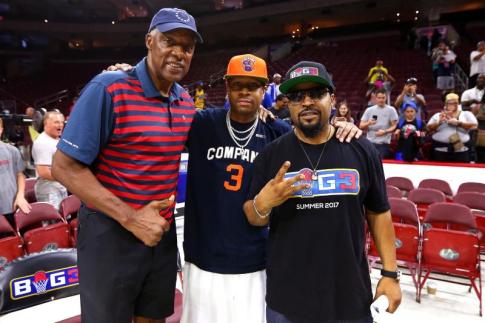 The cross-cultural love affair between Sports and Hip Hop has been a timeless one. Consider all of the sports references in Hip Hop records: J. Cole, Drake, Jay-Z, and Nicki Minaj have all metaphorically paid homage to athletes at one point or another denoting that their lyrical skills are comparable to NBA greats. Some artists prefer to keep it on wax, while others take it to the league with a number on their back. Even vice versa, where athletes take their writing abilities to the studio. Shaq, A.I., Roy Jones Jr. (yeah, yall must’ve forgot), Metta World Peace, and Kobe have all hit the booth at least one time or another to drop a few experimental bars. What creates this everlasting bond between Hip Hop and athletics is that both are competitive, and adrenaline driven. As years progressed, Hip Hop took a direction to monetize in the world of sports in the form of entrepreneurship and minority ownership. In 2004, Nelly had a minority stake in the Charlotte Bobcats, 2005, Snoop created the Snoop Youth Football league and in 2011, Will Smith and Jada had minority ownership in the Philadelphia 76ers. In 2014, Jay-Z’s Roc Nation Sports agency emerged, currently boasting an impressive roster including Kevin Durant, Rudy Gay, Dez Bryant, Skylar Diggins, and Victor Cruz. The most recent names in Hip Hop to have leagues of there own? Ice Cube, Master P, and Jadakiss.

Ice Cube’s “Big 3” basketball league’s inaugural season was this year and took off in a major way. Co-Founded with CEO Jeff Kwatinetz (“The Firm” entertainment agency), the Big 3 is a league where retired NBA players travel to different cities to compete in 3-on-3 games all in the same day. The league defied traditional rules of professional basketball where the team to reach 60 points first, wins. Big 3 includes eight teams with notable players including Allen Iverson, Chauncey Billups, Rashard Lewis, Kenyon Martin, and Mike Bibby. With the founding of this league, Cube even stuck to his Silver and Black roots with the CEO of the league being none other than Oakland Raiders former operation exec Amy Trask.

Taking a non-traditional basketball league approach is Master P with the Global Mixed Gender Basketball league. P teamed up with Tameka “Tiny” Harris bringing equality to the hardwood where both men and women compete on the same floor. Master P is the President of GMGB, and make no mistakes, apart from being a business man, his resume  also includes pro-athlete as he was signed in the NBA to the Charlotte Hornets, and Toronto Raptors. This league is uniquely diverse not only because of its co-ed teams, but there are no salary differences whatsoever. Both male and female athletes are paid the same to compete; a huge step forward in the world of sports. Six teams make up the league, one being the Atlanta Heirs which is owned by Tiny. The mission of the league not only promotes equality, but also, each team gives back to its respective communities.

Jadakiss is the newest Hip Hop artist to attach his name to a sports team. The newly developed AAU travel team Jadakiss Elite, is a haven for inner city youth in New York City to develop and showcase their hoop skills as they ball towards a promising future. Numerous Instagram posts from the team’s Instagram account (@jadakisselite) show photos and video footage of the talented youth holding trophies, as well as adults donning bright yellow and green trimmed jerseys with “Money, Power, Respect” stitched on the back. They appear to be #1 in their Pee Wee standings and these youth are determined to succeed. The team is in its developing stages as a summer league, but from the looks of it, it will expand exponentially as a positive impact in the world of student athletes. Jadakiss has not only earned his way to Top 5 status in the Hip Hop world, but now also as an influencer amongst young athletes in the community.