Protesters rallied Thursday, demanding justice for the fatal shooting of unarmed 22-year old Stephon Clark. The police shooting occurred Sunday night as the police were responding to reports that someone was breaking into cars in a South Sacramento neighborhood. Clark was considered a suspect in the break-ins and aerial footage shows Clark jumping over a fence into a backyard which belonged to his grandparents’ house where he resided.

Today, an Oakland Civil Rights Attorney has released the names of the Sacramento Police Department officers who killed Clark as Terrence Mercadal and Jared Robinet. The body cam footage was released and the two police officers involved demanded Clark show them his hands and instantly yelled “Gun, gun, gun!” before firing 20 shots at the young man, killing him. Clark never had a gun, he was holding a cell phone. The downtown Sacramento area including parts of highway I-5, and the Golden 1 Center were completely blocked by protesters. Videos of the protest spread like wildfire through social media with the hash tags #BlackLivesMatter , #StephonClark , and #JusticeForZoe. More protests are planned for today. View social media reactions below: 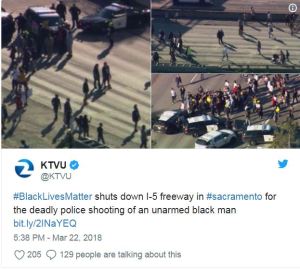 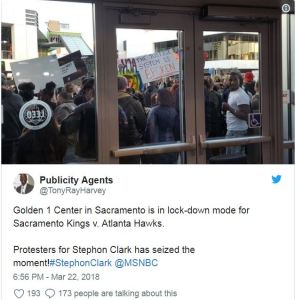